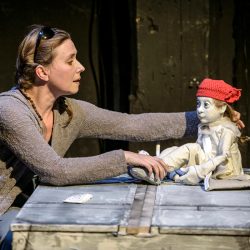 A long journey of a courageous young girl fleeing from war, based on the award-winning children’s book by Joke van Leeuwen.

This performance offers a way to present difficult material and subject matter for young audiences with warmth, compassion and marvel. Theater Waidspeicher create a safe space for children to hear the story of Toda. Toda is in fact not named Toda. Her real name is very long and contains the letter ‘K’ four times, but where she now lives nobody can pronounce her actual name. Toda tells the story of her escape. There is a war in the country that she comes from – “one lot are fighting against the other lot.” Toda’s father gets conscripted and learns how to become a bush in order to camouflage himself. For a short time her grandmother looks after the young girl until where they live becomes too dangerous. Toda needs to cross the border to the neighboring country where her mother has been living for several years. During her journey to safety Toda has many different adventures and along the way meets various people: money-grubbing people, smugglers, children who give their toys away and a friendly commander who is unable to command. 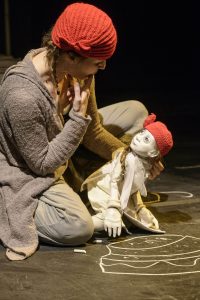 COMPANY DESCRIPTION: Theater Waidspeicher was founded in 1979 as the puppet theater department of the Städtische Bühnen Erfurt. Since 1986 the theater has had its home in the heart of Erfurt’s Altstadt in a beautifully renovated warehouse. More than 27,000 people come each year for a popular festival of 300 guest performances. The Theater Waidspeicher repertoire encompasses material from every epoch and a range of genres from fairy/traditional stories to modern narrative theater to literary classics. The majority of productions are for children and young people, however the evening performances for adult audiences are also very popular. The ensemble has toured throughout Europe, U.S.A., Canada, Mexico, Taiwan, Israel and Russia. Since 2009 Theater Waidspeicher has been led by Sibylle Tröster.

translated into German by Hanni Ehlers