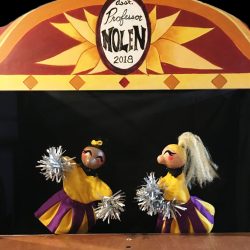 After being pushed around for over 400 years, the famous hand puppet heroine Judy, has had enough! Cheer for her as she goes on a quest for respect, justice, and a well-deserved nap.

Puppeteer Sarah Nolen delivers an astonishing one-woman performance in this modern feminist interpretation of the traditional Punch and Judy puppet show. Audiences young and old will laugh, cry, yell and gasp in response to this highly-interactive, hilarious, hand-crafted farce. 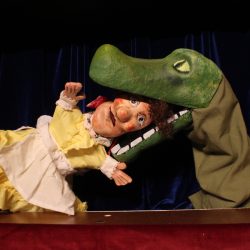 Sarah Nolen is known for creating versatile, witty, imaginative productions that inspire people of all ages. At Puppet Showplace Theater, she performs regularly for youth and family audiences and teaches puppetry in camps, workshops and adult classes. Sarah has appeared in the National Puppet Slam, at the Puppets in Paradise Festival and the Out of Bounds Comedy Festival. She has toured internationally to Spain, Turkey and Canada. Sarah earned her BFA in Cinema-Television from Southern Methodist University and her MFA in Puppet Arts from the University of Connecticut.