This panel discusses how we talk with children about social justice, and how we plant the seeds to shape change rather than perpetrate a harmful norm. We celebrate perspective-altering literature for children and adults and how it correlates with art-making practice.

Sofía Padilla is a theater artist from Mexico City who works internationally as an actor and puppeteer. She graduated from the acting conservatory Centro Universitario de Teatro UNAM, Mexico City, in 2007. After developing her career as an actor and director from 2007-2015, Sofía joined Bread and Puppet Theater in Vermont USA as a puppeteer, and has performed on six tours across the United States. On Television, Sofía worked as the Assistant Director of the 2016 season of Sesame Street in Mexico City: “Monstruos super sanos”. Currently she works as Artistic Co-Director of the performing arts company Paradox Teatro, whom she co-founded with United States artist Davey T Steinman in 2017.

After finishing school, Kathrin Blüchert, a native of Berlin, worked as an artistic assistant as well as in various dance theater projects. She graduated from the Faculty of Puppetry at the “Ernst Busch” Academy of Dramatic Arts (Hochschule für Schauspielkunst “Ernst Busch” Berlin). Various engagements took her to the Theater of the Arts in Zurich, the Deutsches Theater Berlin, the Theater des Lachens in Frankfurt/Oder. From 2003 to 2005 she was a member of the Theater Waidspeicher ensemble. Following this she worked freelance. From 2009 to 2012 she was an actress and puppeteer with Theater Naumburg/Saale. From August 2013 onwards Kathrin Blüchert is once more a member of the Theater Waidspeicher ensemble, where she has appeared in more than 20 productions since then. 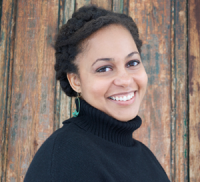 Chrissy Colón Bradt is an educator, mom, and lifelong learner. She has served as both a classroom teacher and school administrator. She is passionate about teaching and learning and the power of honest education to aid in the creation of new, more just worlds for us all. Chrissy has facilitated Parenting 4 Social Justice Workshops, student affinity groups, educator conversation groups, and various professional learning workshops for education professionals. Chrissy is a mom of three and enjoys reading to her children and introducing them to new and fantastical worlds. Chrissy holds a B.A. from Barnard College and an MEd from Hunter College. She lives in Vermont with her family.