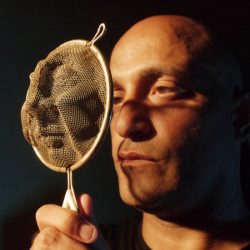 Based on Palestinian artist Karim Shaheen’s true story, “War Maker” is a voyage into Karim’s dreams and delusions.

“War Maker” is a multidisciplinary performance that blends visual art and new media with documentary and object theater. With the mise-en-scene as a resonance chamber, the audience shares the artist’s mindset of having lived in ongoing exile. Karim’s life stands at the crossroads where the performance mirrors his broken war memories. 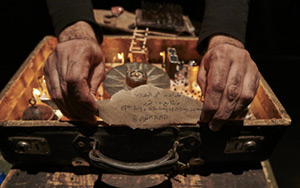 Contrary to his background, Karim Shaheen, an artist who crafted traditional, folk miniature facades of the ancient city of Damascus, dreamt of nurturing his passion for sci-fi films and becoming a visual effects designer of the silver screen in America. Since his early childhood, Karim and his family encountered war. First, the Iran-Iraq War (1980-1988); second, the invasion of Kuwait during the Gulf War in 1990; and then, Yugoslavian Civil Wars in 1991. Deported from Syria in 2000, Karim fled to more congenial countries. His passage through Russia, Ukraine, Romania, and Hungary finally destroyed family bonds.

Since 2015, Dafa Puppet Theatre in Jordan and The Czech Republic has built up a reputation for its evocative aesthetics, the quality of storytelling and social commitment. Children and adults have equally enjoyed the magic of their work. The multiple award-winning company has toured across The Czech Republic, Slovakia, Poland, Romania, Hungary, Portugal, Austria, Germany, Lithuania, Sweden, Norway, France, Macao, Hong Kong, Egypt, Jordan, Lebanon, Bahrain, United Arab Emirates, and the Sultanate of Oman.