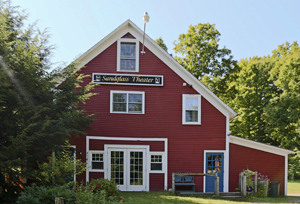 Sandglass is dedicated to the arts of theater and puppetry as a means of exploring contemporary issues, inspiring dialogue, and sparking wonder. We create original ensemble performances and collaborations, present diverse theater artists, produce events that serve our communities, and teach our art.

Our mission is to sustain an artist-driven theater with an emphasis on advancing the development of puppetry as a unique and unusual theater form that embodies the human experience. Sandglass creates new work, engages in challenging collaborations, presents thought-provoking and responsible art, hosts other artists to promote the art of puppetry and expose our audiences to diverse styles and traditions, teaches our process and traditions, and cultivates a fire to create and to keep on creating.

Since opening our theater in Putney, Vermont, in 1996, Sandglass has presented ten international festivals of puppet theater, with performing companies from eastern and western Europe, Japan, Cambodia, Israel, Australia, and Central and South America. The festivals have included performances, workshops, local food events, lectures, panel discussions, and even larger than life Ostriches taking over downtown Brattleboro. Other Sandglass programs include the Voices of Community series since 2005, which features artists whose work addresses issues of race, gender, disability, and social justice. This series earned Sandglass an invitation to join the National Performance Network. NPN partners with us on funding these residencies and connects Sandglass to a national dialogue about Arts Policy. Sandglass also presents the Winter Sunshine Series for family audiences every March and the wildly popular community events, Puppets in Paradise community event, originally in the Hayward Gardens in neighboring Westminster West, and now at the Retreat Farm in Brattleboro.

As a performing and touring company, we are currently engaged in two new theater projects that integrate art and social issues, one of which will premiere at this year’s Puppets in the Green Mountains Festival. Flushing is a collaboration between Eric Bass and Linda Parris-Bailey about legacy, race, identity and transitions.

As a performing and touring company, we are currently engaged in two projects that integrate art and social issues. Our production of D-Generation, An Exaltation of Larks, which looks at the creativity in people with late-stage dementia, is touring nationally, under a grant from the National Theater Project, administered by the New England Foundation for the Arts (with lead funding from the Andrew W. Mellon Foundation). We are also engaged in a collaboration with Teatro Luis Poma of El Salvador on a production of Nathan the Wise, a project that looks at the interrelationship between Muslims, Christians, and Jews, and resonates internationally as well as locally in El Salvador, where, in the view of the Luis Poma artists, religious intolerance is again on the rise.

Sandglass Theater acknowledges that we are located on the unceded land of the Pennacook, Wabanaki and Abenaki peoples. We invite you to join us in acknowledging the Pennacook, Wabanaki Confederacy and Abenaki community, their elders both past and present, as well as future generations. Sandglass Theater also acknowledges that it was founded upon exclusions and erasures of many Indigenous peoples. This acknowledgement demonstrates a commitment to beginning the process of working to dismantle the ongoing legacies of settler colonialism.

This year Sandglass is celebrating our 40th anniversary as a force for creating innovative theater and community building. The company is engaged in an exciting process of transition as Shoshana Bass officially takes over artistic direction of the company and Eric Bass and Ines Zeller Bass retire from leadership.

Please visit our home website if you want to learn more about us
and see our current touring and events calendars: